Posted on August 7, 2015 by mattmarovich

I’m warning you, if you cry easily you may want to skip this one. I’ve been writing this post in my heart all week, putting it down in fits and starts. The screen keeps blurring, you see, and I have to stop typing to wipe my tears. 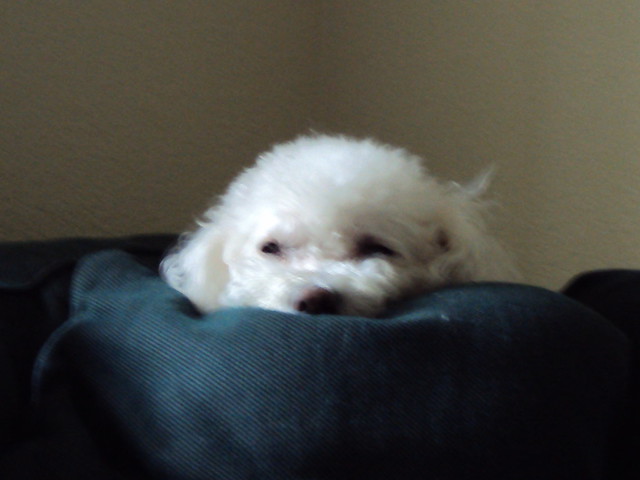 This is Jack. Jack died today. Before we get to Jack, and we will, I would like to take a moment and talk about this dog. 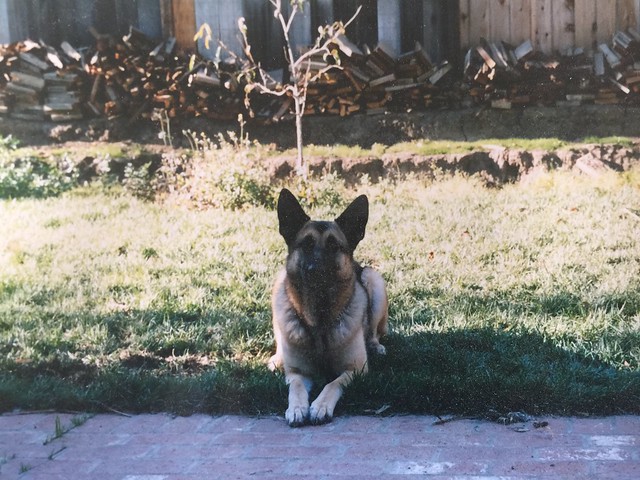 Sophie was my family’s dog for a good chunk of my later childhood. We got her as a puppy from our neighbor down the street as soon as she was weaned. He had a female Shepherd and bred her, no idea really why, and my sister fell in love with the idea of having a dog when she saw the litter of squirming puppies and picked one who’d become ours.

My father? He wasn’t so sure and expressed his point of view with “If we get a dog, I’m moving out!”

But like water flowing over a stone my father was worn down and in a surprisingly short amount of time we had a dog (and my dad did not move out). I’m pretty sure it didn’t help that Sophie was your typical, super-adorable German Shepherd puppy with the humongously over-sized feet, floppy ears, and a happy, bright personality. She was also very smart, learning commands quickly so that my mother house trained her fast. My father, eventually, fell in love with her too and still speaks well of her. They still have her favorite bone in their backyard even though she’s been gone almost ten years.

And while she might’ve been the family’s dog, really I’ve always seen her as mine. It was my room she’d come racing up to after getting back inside from her morning potty break, to jump on my bed to make sure I was awake, and out of my siblings I think I walked her the most. She was an incredible dog and I missed her when I went to college.

As is usual with large dogs, Sophie developed problems. Thanks to a surgery early in her life she didn’t get the hip dysplasia that most Shepherds do but she did get arthritis very severely. She went deaf and was going blind among other more serious issues and, unfortunately, I learned after the fact when my parents had her put down. I try not to live my life with any regrets but not being there when they did that is one of the very few I have. My mother insists that it was something they had to do that day when the vet saw her, that she was in pain, but I would’ve left work and done the drive to Sacramento, breaking all manner of traffic laws, in a heartbeat if I’d known. I hate that I wasn’t there for her in her final moments.

So that’s why there wasn’t anything that was going to keep me from being there when it was Jack’s time. 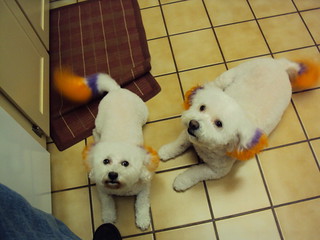 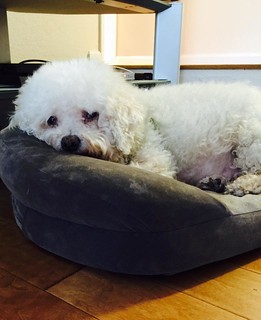 I got Jack, along with his sister Maggie, when Michelle came into my life. Jack’s not “breed typical”. First off, as you can see, he was forty pounds of dog (even though we didn’t over feed him) when Bichons typically weigh less than half that. He had skin conditions, a lazy eye, his nose wasn’t uniformly black, skin tags, and was starting to go blind in the last year or two. But he was so full of love. I’ve never, even with Sophie, had a more good-natured, gentle, simply happy dog. He’d do this hopping thing whenever it was time for dinner, his tongue flopping out of the side of his mouth, and it always reminded of me when Chris Farley would get excited about something. When he wanted pets, which was often, he’d just come up to you, burrow his face into your thigh, and flop his fat body down next to you and demand them. And he bonded with me after a short time, probably out of some kind of male solidarity.

Back at the end of February we noticed he was peeing more in the house and we thought it was just that he was being lazy since it was intermittent, but soon it was becoming more frequent and, in March, I noticed blood in his urine. I took him in to the vet and they ran tests, kidney function was good, no sign of bladder stones on x-rays, no bladder infection, and the doctor thought that it might be Cushing’s Disease (which would explain his size) but the cost to test it was high and the treatment for it was kind of terrible for dogs. The vet kind of shrugged and said that if things got worse, bring him in, but without a clear idea of why he was having these symptoms there wasn’t much they could do, so they put him on a general antibiotic and that was it.

Things continued, we moved into our new house, and then there was a day in late June when I came back into the rest of the house from having a shower and found that he’d had an accident and there was more blood than urine, a lot more. Back to the vet we went, more tests were run, and while the mix of urine to blood returned to “normal”, all the tests came back inconclusive, so they referred us to another vet for an ultrasound in July.

It was bladder cancer. If a pregnant woman had shown you the ultrasound you might’ve been tempted to congratulate her on the size of her child but for Jack most of his bladder was filled with a tumor, which meant that while he still had the water needs of an older adult, forty pound dog, his bladder didn’t have the capacity to hold that much urine, which was why he was peeing all the time. The blood in his urine was from the tumor. The type of cancer it was, the doctor was sure, was not any kind that was ever going to get better. On the ultrasound I was looking at the death of my dog.

Jack, however, did get lucky in one thing at least. The tumor was located pretty much in the middle of his bladder, which meant that his kidneys could still do their thing and his ability to urinate wasn’t blocked. The doctor said he maybe had six months, probably less, and gave me some treatment options that might give us more time which Michelle and I decided to pass on; they wouldn’t have made him better, they would’ve just given us more time that would’ve been miserable for him, which meant we would’ve been prolonging his suffering simply for our benefit.

Which, to be blunt, would’ve been fucked up.

So we decided to take him home and simply love him as much as we could, agreeing that when we saw that he was starting to get worse or was noticeably in pain that we’d take the final step. That point was reached two weeks ago and we made the call, scheduling an appointment with a traveling vet. Last Sunday, to celebrate our fat boy, we had Jack Day. 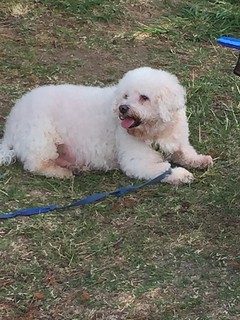 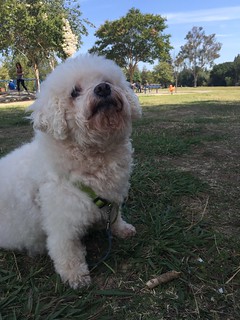 Jack Day was where we took our dogs to spend most of the day in the park. We invited some friends who knew Jack and loved him so he could get all the pets he wanted, eat all the people food he could gulp down, played fetch a little (though running and walking much wasn’t his thing). We wanted to spend one last, perfect day with our boy before the end and, thankfully, the summer played along and gave us a gently warm day with a nice, cool breeze. It was all we could’ve asked for.

Today we said goodbye to our fat Jacker dog. The vet has come, done her thing, I carried him out to her car, and she took him away. For only being a small dog, our house feels so much more empty for his absence. I know we made the right decision, there’s no doubt at all, but that’s not a balm to my heart. 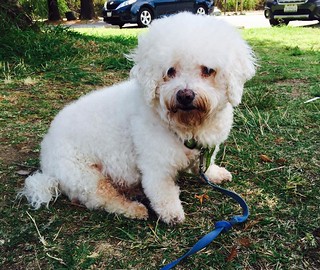 Dogs break our hearts. They enter our lives and they bring such joy and happiness to us, even when at times they pee on the rug or do something else to annoy you. We love them, care for them, and for a few short years they’re family and then they are gone, leaving us with our memories and our grief.

Dogs break our hearts and we wouldn’t want it any other way.

Good bye, Jacker, you were a very good dog. 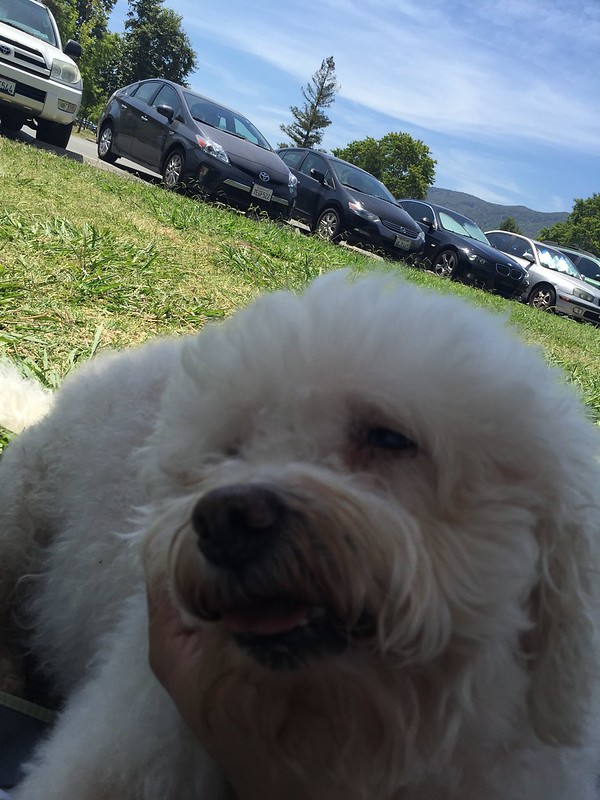 This entry was posted in Uncategorized and tagged Family. Bookmark the permalink.

2 Responses to A Good Dog